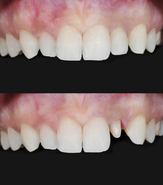 Crown lengthening, also known as crown exposure, is a surgical procedure performed when there is not enough exposed tooth structure to place a restoration on the tooth. This procedure removes gum tissue and/or bone to expose more of the tooth, allowing a crown or filling to be put in place. Crown lengthening is often performed after a tooth breaks off at the gum or a crown or filling is removed and the tooth underneath is significantly decayed. A decent amount of healthy tooth structure is needed in order to properly perform a restoration.

The crown lengthening procedure is performed under local anesthesia to minimize any discomfort, and takes about an hour to perform, although the time period may vary depending on the number of teeth being treated. During the procedure, the periodontist will make incisions in the gums to create a flap, which will allow access to the tooth root and surrounding bone. Gum tissue may then be removed to reveal enough of the tooth structure, although some cases may require bone removal as well. Bone removal is a more intricate process that involves several different surgical tools. The teeth may appear longer than usual after bone and gum removal, since more of the actual tooth is now exposed.

Recovery after a Crown Lengthening

After the crown lengthening procedure, the treated area will be sutured and dressed in a protective bandage to promote proper healing. It is recommended that patients apply ice to the region to reduce swelling and minimize discomfort. It is also recommended that the patient follow a soft diet for the first few days after treatment.

Patients are required to return to the periodontist's office 1 to 2 weeks after the procedure. At this point the sutures will be removed and the healing process will be evaluated. The crown or filling will not be placed on the treated tooth until at least three months after the lengthening procedure to ensure that the tooth is fully healed and prepared for restoration.

Although crown lengthening is considered safe for most patients, there is some risk of infection, bleeding and sensitivity to hot or cold food or drink.